They guy at the test station told me i may need a new catalytic coverter or check my EGR.

Before taking my car for the smog check, i had a bad O2 Sensor. I repaired it, after I repaired it (had broken tip), the light did not come back on.

These are the possible problems:

I will post my results with what i did once i pass this stupid test.

------------ 2 days later ------------
I dediced to check the catalytic coverter per the advice of the tech at the emission place. I had to remove the exhaust to check this. When I removed the exhause i saw that one of the Oxygen sensors was broken. So i dediced to replaced both of them with new one. 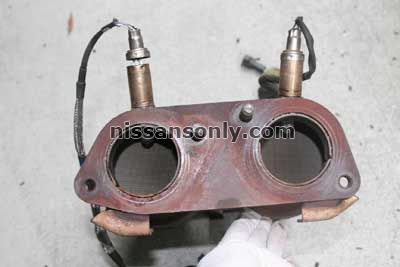 as you can see from this picture, both of my catalitic coverters are in good shape, now i know that its not the cats. 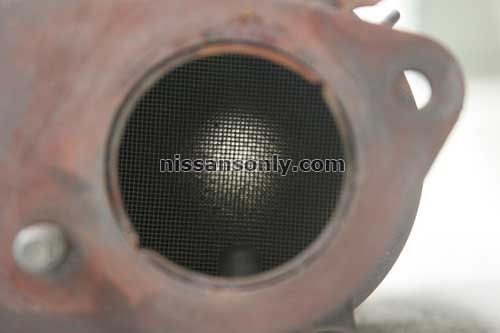 I checked the EGR valve as is operational, according to the manual, i am soupposed to left up the diagfram and the engine should stall, and it did.

I replaced both PVC valves.

TWO WEEKS LATER ------------
I went back to the place where I failed t e emissions test the first time because they give a free retest. I was nervous taking the car back because I didn''t have to deal with taking the car to an auto shop for only for them to tell me its going to cost me like some $2,500 to fix it...

As I took the car back to the testing facility, I let the car idle for like 5 minutes before telling them to start the test, this way the catalytic converters will be hot thus burning the pollutions better. As the technician started to do the test, I prayed to Jesus for the car to pass the test. after about 7 minutes, I was relived when the guy at the emission test facility gave me a thumbs up. I remembered my prayer to jesus at that moment and thanked The Lord Jesus Christ.

at the end, I think my car failed because of the ba o2 sensor, you see, prior to taking my car for the test, I had replaced the engine with a JDM engine because the old one broke the timing belt and in the process it broke the whole engine.. Anyway, before I replaced the engine, my car had the check engine lamp (light) on with a o2 sensor code. When I removed the exhaust I found the passenger side o2 sensor was broken, the terminals were bent, so I thouhgt by straiting it it would fix it. After fixing the o2 sensor, the check enginee light went off so I thought it was fixed... Because I was cheap and not replacing it when I should have, I had to go through this ordeal.

its been about two weeks since i failed the smoge check and have done the following to prepare for the re-test:

Finally, I am so thankful that I don't have to deal with this for the next two years.

well, its been 2 years since i went trhough this whole ordeal. and yet again, when i went to the smog check station i fail.

i gave my car a tune up and still failed.

finally, i checked my computer for any errors, there was a p0325 error which is the knock sensor. i replaced it and then i passed the test on the third try


this is what the paper said:

2nd Try - FAILED - on the second try i flushed the oil, changed the oil and oil filter, cleaned the intake with intake spray


3rd try -PASSED - i changed the two 02 Sensors and the knock sensor. i was getting a p0325 on the knock sensor so i replaced it, this time it passed the test. as you can see there is a big difference. the knock sensor is important because it affects the timing. so if your timing is incorrect, your engine can be running lean.. which means that its running more gasoline than air in the air/gas ratio. im not sure if the 02 sensors were necessary to change, but i didnt take any chances, they cost me about 75 dollars each, and the knock sensor was $189 dollars.

Why do you think you failed the test?

JOAQUIN
Sat Sep 22, 2007
JOAQUIN
gran novela el "embrujo de alhambra" obteniendo todo un exito
Paul
Sat Feb 17, 2007
can anyone show me how to cheat on how to pass smog check by cheating. are there any tricks i should know or can any share their secrets with us here in forum.
david
Mon Jan 20, 2014
well my 93 z32 n/a has been sitting since 4/12 from failed smog,been out of work due to injury so no money no love,i do start it every week to keep seals good.the smog guy told me he wasnt sure he said catalytic converters he said in california emisions changed for them but at the time 2 years before i passed,and they were new magnaflows.i have no error codes checked with onboard cpu and consult diagnostic interface

mas
Fri May 25, 2012
California continues to change the emissions maximums on particle matter in vehicles. A vehicle with 10 years will start to fail on a regular basis.
Majority time can get away with O2 sensor and slight tune up. In my opinion after speaking to techs California wants to get rid (off the road) of the older vehicles.
JOAQUIN
Thu Dec 30, 2010
youtube dot com /wa VIDEO NOVELA EL EMBRUJO DE ALHAMBRA