Tutorial On How To Retrieve Password From Stored In Firefox Mozilla

This Page Contains information about Tutorial On How To Retrieve Password From Stored In Firefox Mozilla By wallpaperama in category Tutorial And Guides with 19 Replies. [1452], Last Updated: Sun Jun 14, 2020
wallpaperama
Wed Aug 20, 2008
19 Comments
13263 Visits
wow, firefox saved my life today.

sometime i go i was managing a dedicated server for a customer. they had a web panel you can login to and i was given the password. when i logged in, i used firefox to view the website, and that website required a password. 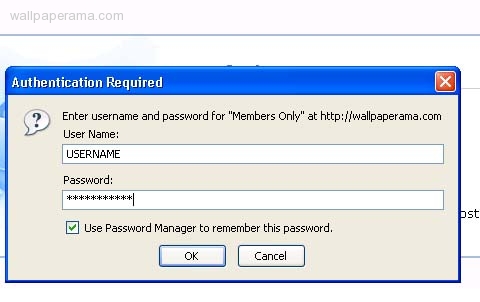 as you can see, there is an option in that says: Use Password Manager to remember this password.

but today i had to login again, but i was dumb and i didnt save the password anywere, and i have no idea how am i going to make the changes they need becaus i forgot the password.. also, i have another challenge.. because im not using the same computer as i was using before because i had to re-image my computer, and to add to the problem, im not even using the same version of firefox. but let me tell you how i did it....

ok, i can't use my old version2 files with my current version3 files of firefox, so i have to transfer my saved files to a computer with version 2 of firefox.. lucky me, i have a spare computer that doesn't have firefox already installed. so i installed firefox version 2 on that machine.

now that i have firefox version 2, when i go to this folder: C:\Documents and Settings\USER\Application Data\Mozilla there is a folder called Firefox this is the folder i need to replace with the old one, because it contains all the files and passwords stored in firefox as hash. the are encrypted, so you can read them through a text editor like notepad,, believe me, i tried. hahahaa

so i simply rename the original Firefox folder as Firefox-original and put my old Firefox folder along with a file called registry. (make sure you are not running firefox while you are renaming the Firefox folder, otherwise, you wont be able to, the system will not let you rename the folder while firefox is running)

now that i have my old firefox folder, i can start firefox, and it will have all the information from my old computer, including my bookmarks, my cached, my history, and ofcourse, my saved passwords.. so now when i visit the website, i see that my username and password, is automatically populated.. but it only shows my usernamed, as for the password, i only see ****** bunch of little stars.. thats not good, because i still need to know what the password is... well, this is how you can decrypt the pasword:

in firefox, go to Tools and Options 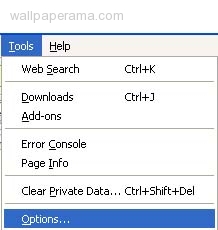 now go to the security tab, and click on the Show Passwords button (see arrow in picture) 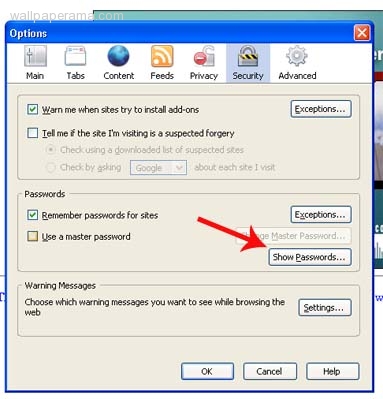 now you should see the site name and the username in the windows, here, i put example.com as the stie and myusername as the user name saved in firefox, but it still doesnt show the password,, well, you see that button at the bottom where is says: Show Passwords, well click on that and you will see the password for that site. 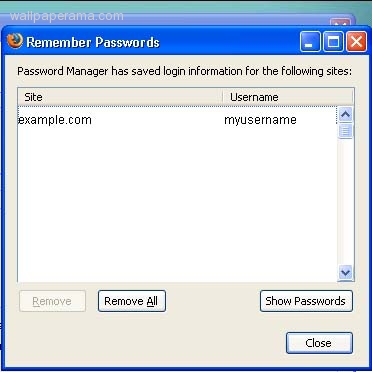 when you click on it, it will ask you if you are sure, just say yes, and all the passwords will be shown in plain and readable text which you can read and find out what the password is.. thank you firefox!!!! 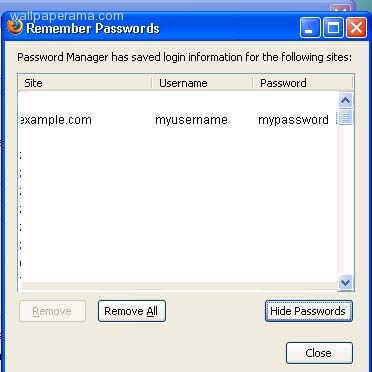 i hope this helps you as it did myself...

how did this help you?

Rosemary
Sat May 12, 2012
In my version of Firefox there is no 'Options' under tools!
Balaji
Fri May 25, 2012
its mozilla firefox really working. i am really thanks to u.

Kwesi
Mon Aug 15, 2011
thanks was very helpful
Czar
Tue Aug 02, 2011
No, it didn't hepl
James
Wed Jul 27, 2011
I had changed my webmail password whilst drunk. I could login from my home PC, but couldn't login elsewhere. Thank you for saving my butt. James